A Beginner's Guide to Magic: The Gathering

THE BASICS OF MAGIC: THE GATHERING 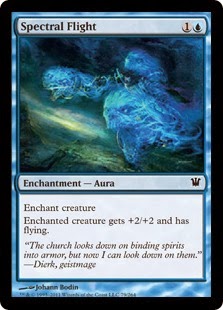 Even if you’ve never personally tapped a land for mana, there’s a good chance you’ve at least heard of the card game “Magic: the Gathering”. First released in 1994, Magic has stood the test of time as both a fun and strategic game that continues to attract players with its high level of customization and widespread network of both casual and competitive gameplay opportunities.

While you’ll certainly want to spend some time practicing at the kitchen table, joining in an organized event can be a lot of fun! My first foray into organized tournament play was four years ago when I attended a “Friday Night Magic” event at the Place d’Orleans mall. There were only about eight other players and they were roughly the age group of Doogie Howser...which did a lot to calm my nerves. Over the years I’ve attended many more local Magic events (usually with a mostly adult crowd) and, sadly, I’ve yet to see more than four women at any event (with the exception of those run by the Ottawa Ladies’ MTG Society).

Magic is certainly a complex game, but like most good games the fundamentals are actually pretty simple. Here is a summary of how the game works:

Each player has a deck of cards and 20 life points. Your mission is to use your cards to bring your opponent to 0 life (or in rare cases, to run them out of cards).

At the beginning of your turn, you draw a card and may play one land card:
Lands provide “mana” - which is what you need to cast spells - and come in five colours: red, green, black, blue, white.

The most common thing you will use your mana for is to play creatures, which can be used to attack your opponent or to protect you from their creatures by “blocking”. The two numbers in the bottom right hand corner indicate the creature’s power (how much damage it deals) and toughness (how much damage it can take before it dies).

Other types of spells include artifacts, enchantments, instants, and sorceries, which can do things like directly injure your opponent, kill opposing creatures, and increase the power of your own creatures. 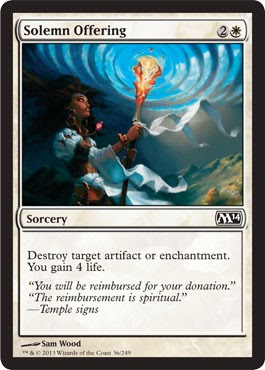 And that’s basically it! You take turns drawing cards, playing lands, and casting spells until one of you deals the final blow and declares victory.

Would you like to learn more? “Duels of the Planeswalkers” is a decent online version of the game with easy-to-use tutorials and is available on Xbox, PlayStation, PC, iPad, or your Android tablet. If you prefer to play face to face, contact the Comic Book Shoppe or check the event schedules of our local comic book stores as many offer several M:tG events per week.

Angela is a 30-something year old mom of three kids - a baby, a school-aged kid and a teenager – and a furbaby, living in Orleans with her geek soul mate husband. She studied English Literature and Social Work but took an unexpected turn somewhere and ended up working as a policy analyst for the feds. Hobbies include reading, playing boardgames and Magic: the Gathering, cooking healthy foods, blogging, and discussing favourite tv shows and movies. She is the proud organizer of the Ottawa Geek Social Club, which strives to provide meetup opportunities that reflect the many facets of geekdom and beyond! www.ogsc.ca.
Posted by Jordan at 03:00

Email ThisBlogThis!Share to TwitterShare to FacebookShare to Pinterest
Labels: Angela H, Gaming, How To, Magic the Gathering