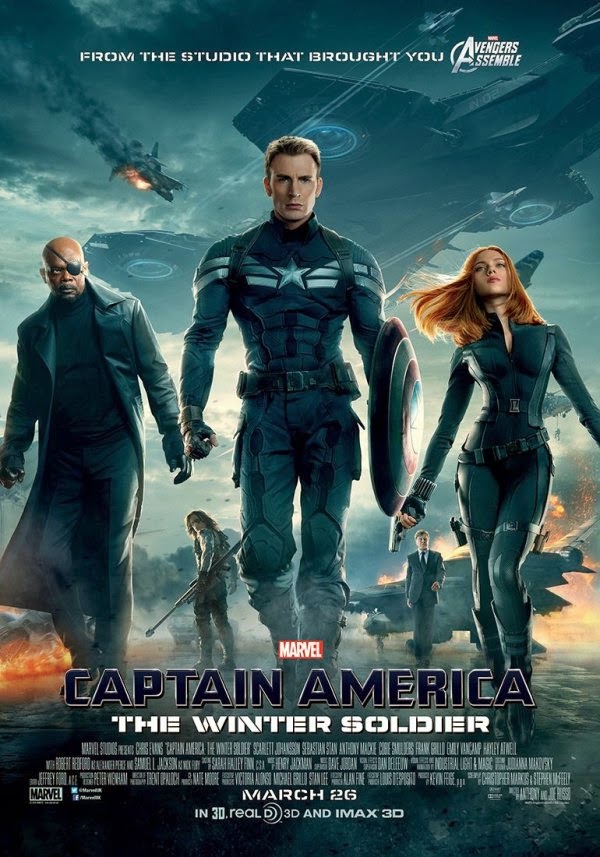 "Falcon: How do we know the good guys from the bad?
Captain America: If they are shooting at you, they’re bad."

If you want to really simplify things, that line from the trailer sums up Captain America: The Winter Soldier almost perfectly. The movie presents that concept with great action, wonderful performances and all the hallmarks of a Marvel movie you expect and long for.

Before being tossed into yet another international crisis, the audience gets a taste for Steve Rogers day to day life in the 21st century. He works out, going on missions for S.H.I.E.L.D and tries to catch up on everything he’s missed in 70 years. As a side note, I will never complain about being behind on my television watching after seeing his cultural to do list. We get one of the best meet-cutes I've seen in a long time when he runs into, or more accurately past,  Sam Wilson a.k.a Falcon.  Anthony Mackie gives a breakout performance. He falls into a great rhythm of being supportive without looking like he is blindly following along because the script says so.

This movie also accomplished something that I didn't think would happen: I finally understand the appeal of Black Widow. I enjoyed Scarlett Johansson's work in Avengers but I did not get why people were pushing so hard to get Natasha her own movie.  After her significantly beefed up role in The Winter Solider, I see so much potential.  I really hope that Marvel doesn’t drop the ball.

I liked the first Captain America because it was as much a story of personal growth as it was about saving the world.  The Winter Solider stays true to this spirit. We get to see Rogers’ mature as he realizes that it isn’t a simple matter of S.H.I.E.L.D good, everyone else bad. The heroes and villains all want the same thing: a better world, it’s how they go about trying to achieve it that is the problem.