I FIND YOUR LACK OF FEMALE CHARACTERS DISTURBING

In terms of leading actors, that’s one female for every five males. This is classic Smurfette principle, that is, including one female amongst many males rather than the roughly half in existence. As Annalee Newitz writes: “Are we seriously still pretending that the universe is comprised almost entirely of men (and mostly white men at that)? Mythic tales are supposed to open up possibilities, not shut them down.” Exactly. This deal is getting worse and worse all the time.

YOU WILL FIND THAT MANY OF THE TRUTHS WE CLING TO DEPEND GREATLY ON OUR OWN POINT OF VIEW
As one of those people drawn to reading comments sections of articles I read, I noticed many fans reacting negatively to casting criticisms specific to gender. Their arguments are that the original Star Wars films also have few female characters, and that other blockbuster films don’t don’t do any better at equal representation. While both these points are true, improving the situation means we have to start somewhere.

Each of the six movies in the franchise featured only one lead female role - Fisher as Leia Organa in the original trilogy, and Portman as Padme Amidala in the prequels, and only a few significant background roles such as that of Mon Mothma, one of the Alliance founders. I hoped for a more significant female presence in Episode VII in part because of the plethora of female characters in the Star Wars Expanded Universe (books, comic books, video games, toys, animated series, other media). The Tumblr account Women of Star Wars illustrates hundreds of them; for example the Clone Wars cartoons featured a slew of strong female Jedis (Ahsoka Tano, Barriss Offee, Adi Gallia, Shaak Ti, Aayla Secura, Luminara Unduli) as well as Nightsisters (Asajj Ventress, Mother Talzin).

The Battlestar Galactica remake is an example of taking a beloved fictional universe and adding more women (including rewriting a main character as a woman) and, despite initial fears, it worked out rather well. Fans also hoped JJ Abrams, Producer and Director of Star Wars VII, learned from the criticisms received for his portrayal of women in the new Star Trek movies, and fear that Star Wars is heading in the same direction. 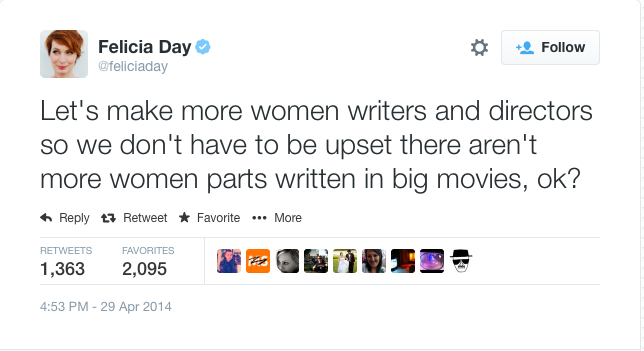 If other movies are guilty of these offenses why single out Star Wars? Because again, we have to start somewhere, and because it’s a big one; a movie that is likely to impact boys and girls for generations to come if it follows its predecessors.  Truly wonderful the mind of a child is - let’s not hinder their perceptions of the role of women.

THERE IS ANOTHER
The good news is there is still one female lead character to be added to the cast. Now if they’d just announce wanting to add three more I’d be all like “I never doubted you! Wonderful!”

IMPOSSIBLE TO SEE, THE FUTURE IS

As for the Star Wars VII story, it’s set to take place 30 years after events in Return of the Jedi, and that the projected release date is December 18, 2015.  Here’s hoping it will be on par with the original trilogy, but never tell me the odds!

Posted by Capital Geek Girls at 21:00