Wonderful Wonder Woman: can they bring her to life on screen? 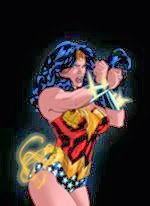 So. Word on the street is that they've cast Wonder Woman for the new Superman/Batman movie. It seems to be all the rage now, creating movies about superheroes (of which I'm very glad we've left the vampire/demons/wolf phase). Which makes me wonder, why aren't they making a Wonder Woman movie? Because if they can find an auspicious plot for a man who controls bugs, I'm sure they can perfect our gorgeous Amazonian.

Back in 2011, they attempted a Wonder Woman series. Which bombed and never even made it past the pilot. Maybe it was because they tried to make it a series. Maybe it's because it was 'created' by David E Kelley. Yes, the same Kelley who created all those law shows, including Ally McBeal. What could he possibly know about superheroes? Easy! Make Diana Prince a lawyer! Who chases criminals through crowded shopping malls on the side.

In 1943, Wonder Woman's creator, William Moulton Marston, (who also invented the polygraph y'all)

explained it perfectly - "Not even girls want to be girls so long as our feminine archetype lacks force, strength, and power. Not wanting to be girls, they don't want to be tender, submissive, peace-loving as good women are. Women's strong qualities have become despised because of their weakness. The obvious remedy is to create a feminine character with all the strength of Superman plus all the allure of a good and beautiful woman"

I grew up in the 70's. A-hem. Every week I'd turn up the TV, let it warm a few minutes, wrap my orange crocheted quilt around my neck, jump off the couch and become Wonder Woman. Not only could she run fast, her lasso could stop any explosion, catch any thief. She was graceful and she had class. Sure she wore a tiny costume, but she was never blatantly sexual, you know? She was kind, sweet, compassionate. She stood up against injustice and inequality. She was a Warrior Princess! And I grew up with the powerful realization that I could be a 'tough' princess, a 'fighting for injustice' princess ... just like Wonder Woman! She gave us permission to be more than little girls. 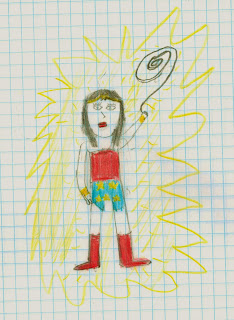 Wonder Woman has been labelled an icon. And rightly so. I still look up to her. Because I can be tough and sweet, a warrior and a snuggler. I can wear my husband's old jeans with a pink, frilly t-shirt. I can go hunting, ride a BMX and plant red geraniums. Wonder Woman encourages a girl to be who she is. A girl. No labels. No expectations. Because not only does Wonder Woman kick ass, she can also cry. And still be Wonder Woman.

Why do we have to trivialize her?

So, here it is. They create a Wonder Woman movie. A simple plot that covers her beginnings as an Amazon Warrior, and her reasons for coming to earth. And while she's saving that hunk of a supporting-actor, make him strong. Make him independent. Make him easy to respect. Because Wonder Woman is worthy of a well-respected man. And then make her choose fighting justice over settling for love. Because no one wants Wonder Woman to get married and fight crime after tucking the kids into bed. It's too exhausting.

Jenn Kelly is a published author who is learning the girl geek-dom.  You can visit her webpage that she is supposed to update, but never does. http://www.jennkelly.com/ Um...that's all.
Posted by Jordan at 09:07