The Hawkeye Initiative: Origins and Legacy

Fortunately, I grew into a normal sized adult woman, with both a spine and internal organs, though the way that women are drawn in comics you could be forgiven for thinking that neither spines nor organs are essential for the female figure.

Women in comic books are frequently posed in sexual ways, or drawn in a manner that suggests weakness, even when they are supposed to be the “strong” character. How much force can be behind the punch they’re dealing the villain, if she’s contorted in such a way as to show both her breasts and her ass?

This is where the Hawkeye Initiative came from.

“How to fix every Strong Female Character pose in superhero comics: Replace the character with Hawkeye doing the same thing” was the statement Gingerhaze shook the tumblr universe with, and soon images and drawings came pouring in. Artists, who were also sick of the way women are portrayed in comics, were putting the manly Hawkeye character from Marvel’s Avengers in some of the more ridiculous poses female superheroes endure.

The twisting, contorting, pouting, and posing that had become normalized in the female image looked weird and wrong, now that we were seeing them in the male figure. This gave the audience a reason to take a step back and think, why is this the way women are posed?

The Hawkeye Initiative seems to be a step in the right direction - we need dialogue and debate in order to make changes happen in comic book art. However we need to be careful that this discussion doesn’t just fade into tumblr history as something that gave us a laugh in 2013, and nothing more.

It’s not that women aren’t supposed to look alluring, or sexy, however the costumes and poses given to ladies by comic book artists are impractical, anatomically impossible, and severely limit the abilities of these female superheroes in their respective worlds. Lady superheroes also need to protect themselves, fight the bad guys, and camouflage, just like the men, and something as useless as Power Girl’s “boob window” is completely unnecessary for anything practical, or even sensual.

Many artists have taken the Hawkeye Initiative as inspiration to re-imagine and redraw some of the famous book super heroines in poses and costumes that make sense, and do not demean women for their sexuality. *

I hope that if I have a daughter in the distant future, she can also run around the playground pretending to be the superhero that inspires her the most, and feel like she can one day grow up to be just like her. Finally, she doesn’t have to be just sexy, to be a super heroine. 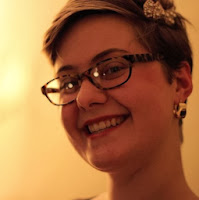 Emily Towsley, can be found either teasing her cat, or philosophizing with a customer over coffee in her second-life as a barista. Messages of support regarding her addiction to Netflix, and news of vintage teacup sales can be left on her twitter. (https://twitter.com/emtowsley) Her spare time is spent reading copious amounts of books, (https://www.goodreads.com/user/show/7246432-milie) or working on her latest blog. (http://spineonline.ca/emily-towsley/)