Polar vortex. Two words striking fear across North America. But don’t fear! Just sit in and break out your DVDs!

No two geeks are created equal and making sure that as many genres and styles are represented, this list includes something for the Brit-pop fan, sci-fi fan and more; but most important, this list of blues-busting films for the geek heart follow the same theme of fun, warm and light entertainment for a cold and wintery afternoon. 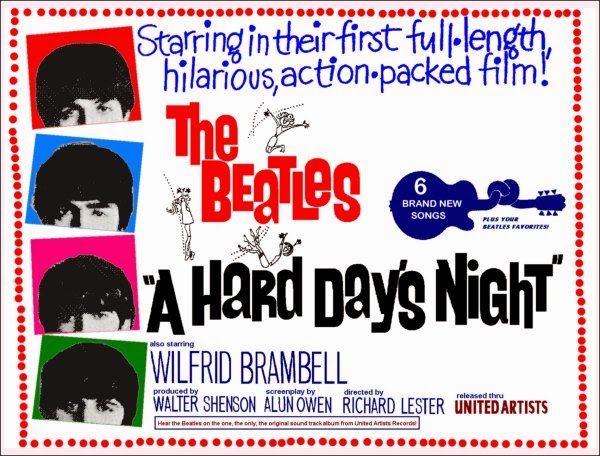 Long before Harry Potter and Doctor Who made their introduction to American audiences, the Beatles were the first kings of Brit pop culture. This film is akin to a nice warm cup of tea after a bubble bath and the worst day at work possible. This movie offers comedy, music, unapologetically British dialogue and cinematography – all of which is just so good, you forget that in the end, this was a hastily put together rock flick with the sole purpose to cash in on the first wave of Beatlemania.

Back in 1997, Independence Day ruled the summer. Action-packed, adrenaline pumping, alien ass-kicking big name actors, you name it, ID4 has it. Fifteen years later, the visual effects have aged, the dialogue is corny and there are so many clichés that creating a drinking game from them would prove fatal to your liver - but it sucks you right in. By the time you realize that every actor is playing their typecast (Randy Quaid as Cousin Eddie, Jeff Goldblum as Jeff Goldblum, etc), the movie is over. It’s just fun, pure and simple. So what if they absolutely had to make you cry when the family dog jumped out of the way of the massive city destroying fireball, you had a good time watching it and you regret nothing.

Dumb & Dumber makes people without an ounce of humour in their bones laugh their ass off. The pairing of Jeff Daniels and Jim Carrey proved to be golden as they flawlessly bounce joke after practical joke off of one another without skipping a beat and 20 years later, we’re still quoting Harry and Lloyd…and shaking in excitement for the sequel scheduled for release later this year. Perfect for those afternoons that you just need something to make you cry laughing!

Disney animated feature films are always a good bet on a slow Sunday afternoon, but instead of reaching for those Disney Renaissance classics (Aladdin, Pocahontas, The Lion King), go for the relentless laughs of The Emperor’s New Groove. Featuring the voices of David Space, John Goodman and Eartha Kitt, the film departed from the 90’s slew of musicals and artistic masterpieces and treated the Disney faithful to a fast paced family comedy.

Alright, so The Tick isn’t a movie, but in this day of binge TV, the forgotten, but lovingly rediscovered series needs to be mentioned. This live-action series based on the satirical 90’s comic and animated series of the same name is exactly what you want from The Tick franchise, right down to the realization that the roll of the Tick was made for star Patrick Warburton. The entire show can be streamed on Netflix.

Emily Plunkett is a recent graduate of the journalism diploma program at Algonquin College. As a freelancer, she’s written for the Ottawa Star and the Sarnia Observer. Notorious for being a Beatlemaniac, a record collector and something nobody can really put a finger on, she enjoys a good Sunday afternoon with CBC Radio chatting away, her knitting in hand and her cat, Levon, snoozing at the end of the bed.
Posted by Jordan at 11:56