Dear Bronies: An Open Letter to My Little Pony Fandom

DEAR BRONIES: AN OPEN LETTER TO MY LITTLE PONY FANDOM
By Mj Baker

I was browsing around on Netflix last night looking for a new documentary and “Bronies: The Extremely Unexpected Adult Fans of My Little Pony” turned up as a suggestion for me from the Netflix Wizards. My initial reaction was a snort and an eye roll. I’m going to be honest; like many others, I have definitely participated in the joking about Bronies and their deep love of My Little Pony (henceforth referred to as MLP) fandom. After the eye-roll though, I realized that when all was said and done; I honestly didn’t know anything really about MLP or the Bronies. How could I in good conscience make the jokes then? The answer to that was that I just can’t. I don’t want to be that person. I hit ‘Play’ and you know what? I am so glad that I did!
I realized that Bronies are no different than any other fan base for anything else. That should be obvious right? I feel ashamed that I hadn’t thought about it like that before. Being a geek and having some cos-play good times myself, how could I not realize this? I hadn’t given it any thought and was quick to judge. As I watched the documentary and saw so many young men being interviewed said  they felt like they had to hide it from their parents. They were scared to tell their family, they were scared of getting beat up by other guys, they were scared what their friends would think. As a queer individual I was shocked by hearing such familiar sentiments. I had just never given it any thought. Seeing all of the Bronies at BronyCon just made me smile and my heart happy. They were in a safe space where they all had something in common, which was how I felt when I went to my first Pride parade and it’s how I feel whenever I go to a ComicCon.
I also hadn’t thought about how terrible it is that we are faulting boys for liking ‘girl’ things! I mean seriously, the show is called ‘My Little Pony: Friendship is Magic’ and promotes the values of generosity, kindness, loyalty, honesty and laughter. How could we not want to encourage these things in everyone!! Some make the argument that Bronies  are creepy/perverts/weirdies and turn MLP into something dirty. You know what? There will always be some who do that with anything. Rule 34 and all that. Why paint everyone with the same brush? Some argue that the shows target age is for kids, and I reject that. I never get tired of watching Sponge Bob and Bugs Bunny. Has the world forgotten that The Transformers was a kids cartoon? Teenage Mutant Ninja Turtles? Maybe the lesson is that if Michael Bay reboots it, grow-ups can like it too. If you want to see some of the ‘creepy/perverts/weirdies’ that make up Bronies then I encourage you punch “Bronie fundraising” into your Google machine. The Bronies have done an incredible amount of fundraising for a wide variety of causes including sick children, international aid, and setting up a permanent scholarship fund at CalArts for aspiring animators.
I guess ultimately what I want to say to all the Bronies out there, I’m sorry. I’m sorry I judged you when I had no understanding about you or MLP. I was completely wrong and I see that now. I’m currently watching an episode of MLP while I write this and you know what? You guys are right! This show is awesome! It’s not even a guilty pleasure because a guilty pleasure is something you feel bad for liking and I don’t. Not one bit. I think maybe MLP has actually made me about 20% cooler. 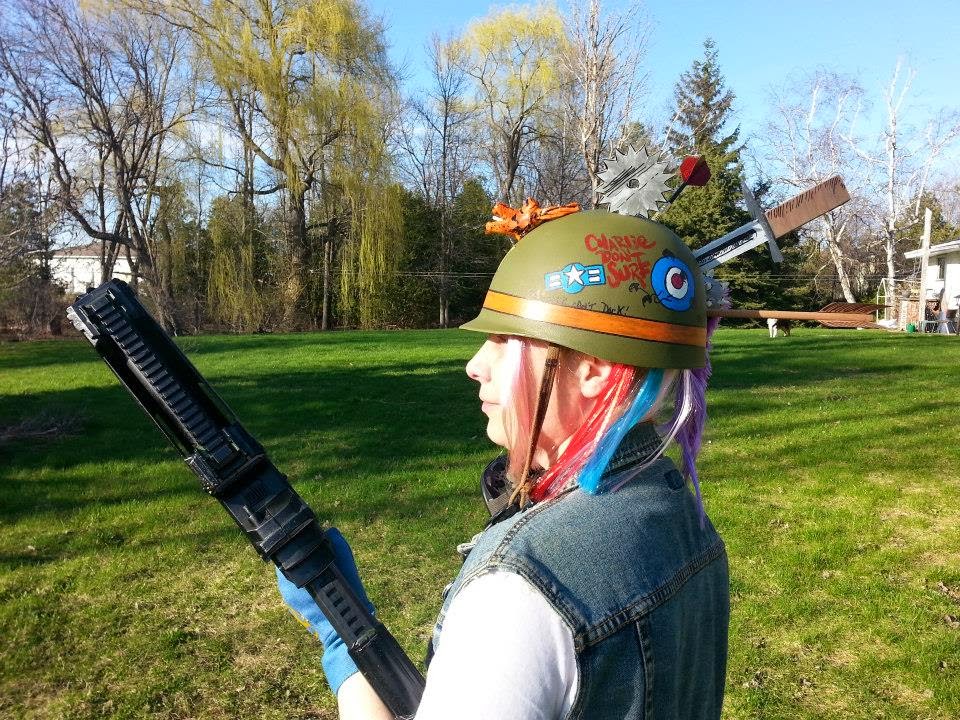 MJ Baker is a baker (no lie); she owns Bake It So! Bakery, a custom-order bakeshop in Ottawa. She is also a lifelong geek, first and foremost a fanatical Star Wars fan. Her head holds more geek and science trivia than Wikipedia. MJ is the co-star of Capital Geek Girls' YouTube show, 'Two Girls Talking'. She loves fireflies, coffee, and books of all sorts.
Posted by Capital Geek Girls at 20:50