There ain't much I need to say that's not here on the poster or up on the facebook event page. RSVP there now! That's right: Capital Geek Girls is going beyond visual, and will be LIVE at the Shoppe! 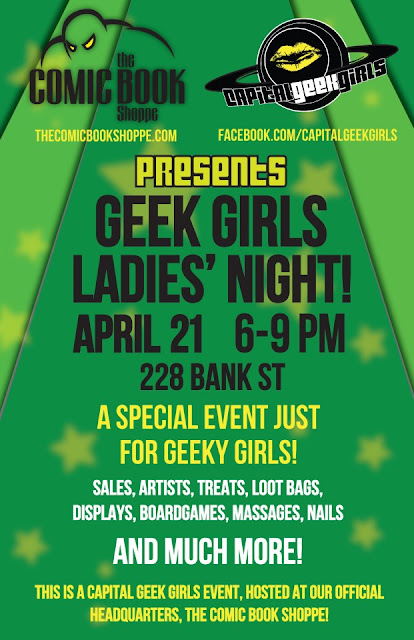 So proud to have this happening, and so proud to have the support of a great girl-friendly Shoppe. Events like this help new geeky girls feel welcome, and veteran geeky girls find each other. And new geeky loves. Special displays will be set up, local girl-friendly businesses are sponsoring, and generally it should be a fabulous evening. Ladies, we want to see alllll of you there. Come join us!
Posted by Jordan at 19:58 No comments:

Girl, Crafted Gears Up for Ottawa Comiccon 2013! (And Wil Wheaton with a ball of twine.) (Fingers crossed.)

Ladies and gents, I hope you’re excited, because I am. Know why?

And soooo much more at this year’s Ottawa Comiccon.

The 2nd annual Ottawa Comiccon is coming the 2nd weekend of May, and I am stoked. Last year the crowds blew away any and all expectations, with approximately 24,000 people making the trip down to the Ernst & Young Centre in Ottawa’s south end. That was about 5 times as many people as originally expected, showing that Ottawa is indeed a geeky town. Way to show the world, Ottawa!

This year, GIRL, CRAFTED has been invited to blog the launch event for the con, as well as right from the comiccon itself. The con weekend promises to be a happy place for geeks of all types, ranging from Walking Dead fans to vintage Batman fans. There’s even a concert on the Friday night with James Marsters—Spike from Buffy the Vampire Slayer. Heck, even Kevin Sorbo (Hercules from the fabulously cheesey 90’s TV show) will be on site, making dreams come true for any of us who may have, ahem, thought he was pretty dapper in his leather pants back in the day.

Of course, there’ll also be tons of vendors in the house, with tons of great fan merch to be had, and this is where I usually spend my time. Costumes are eagerly encouraged and if you haven’t been before, you’ll see just how much the costumed crowd itself is part of the draw for geeks like myself.

I'M COMING FOR YOU, WIL WHEATON

But you know who I’m most excited to see? Wil Wheaton. I never ever thought I’d say that, because while I was raised on Star Trek: the Next Generation—I mean, three episodes a night, kinda thing, on endless repeat—I never liked Wesley Crusher. He was too goody-goody, and things always worked out for him in the end, and it was eternally frustrating to a kid who was watching and thinking, “How the hell did that nerd get on the deck of a starship while I’m stuck here on the couch, grounded again for doing something way less horrible than standing by while all the Dorvanians are exterminated by the Cardassians.” Wesley Crusher seemed to have a horseshoe up his butt, and I didn’t like it.

But I like Wil Wheaton, and I like the important role STNG played in my childhood. I like that Wheaton has made peace with his Crusher celebrite, and has forged a name for himself in the world of geekdom, and maybe most importantly to me: he’s buddies with Jenny Lawson (aka the Bloggess), the funniest-smartest-bestest blogger in the whole wide world. So, if I get to meet Wil Wheaton at the con, it’s kinda like getting to meet Jenny Lawson, and then my head will explode. (Possibly because Wheaton will stand idly by while a Cardassian shoots it, but either way.) I’m hoping we will meet and take a photo to send to the Bloggess and then I can cross two things off my bucket list: meeting Wil Wheaton and having a connection to Lawson.

Anyway, all this to say, you need to head over to the Ottawa Comiccon website and check out the lineup, the events, the music—see it all. Me and my blog posse will be there, getting footage and pics and hopefully—if I’m out-of-this-world lucky—saying hi to Wil Wheaton. Which may not go well, since I basically get tongue-tied around famous people; but when I accidentally call him Wesley eighteen times and drool down my front, it’ll be okay because I’m going as a vintage X-Men character so if he thinks I’m weird and worrisome, he won’t recognize me the next time. Unless he follows me on Twitter. Then I’m screwed.
Posted by Jordan at 19:33 No comments: