Labyrinth Through My Ages

LABYRINTH THROUGH MY AGES
By Angela Hartwick


The 80s were an iconic time for family-friendly geeky films. Fandoms arose from The NeverEnding Story, Willow, Princess Bride, Dark Crystal, E.T the Extra-Terrestrial, Ghostbusters and My Neighbour Totoro among others. My personal favourite of the era is Labyrinth. In this article I’d like to share how my understanding of the plot of Labyrinth has evolved (in a similar manner to a crazy staircase) in the course of the almost three decades since its release.

ONCE UPON A TIME, THERE WAS A BEAUTIFUL YOUNG GIRL WHOSE STEPMOTHER ALWAYS MADE HER STAY HOME WITH THE BABY
An array of supercool people worked on Labyrinth: it is directed by Jim Henson, executively produced by George Lucas, the initial script was drafted by Monty Python’s Terry Jones, and it stars David Bowie and Jennifer Connelly. The plot consists of a 15 year old girl (Connelly) that, upset at babysitting her fussy baby brother, wishes goblins would come take him away. The goblins take the baby to a castle in the middle of an enchanted Labyrinth that is ruled by Jareth (Bowie). Sarah immediately regrets what she wished for and is given a limited amount of time to get to her brother to save him before he becomes a goblin.

THINGS ARE NOT ALWAYS WHAT THEY SEEM IN THIS PLACE

I was three years old when Labyrinth was released. I watched it repeatedly throughout my childhood without really knowing what was happening. My earliest recollections are that I thought Sarah was a bad-tempered princess, the goblin puppets were terrifying, the songs were the best pieces of music ever recorded, I should also have a dog named Merlin, and sometimes I thought Jareth was the villain and at other times a prince. It was probably the feeling there was more to the film that was the lure for frequently rewatching it.

THAT’S NOT FAIR! BUT THAT’S THE WAY IT IS.
As an older kid I identified with and looked up to Sarah. Her angst seemed perfectly legit and she was right on to complain about life not being fair! I thought she was smart to use lipstick to trace her steps, that she had the right answer to which door to choose (though now it sounds like circular logic), and I admired the way she spoke up against Jareth. I started to grasp some of the life lessons of the film, such as the importance of using the right words, and not taking things for granted. I understood that Jareth was mean and manipulative because he, you know, stole babies, trapped people in oubliettes and sent cleaners to squash them, but the psychological evil he inflicts (mind games, torture, threats, drugs) took me longer to concept.

WHAT’S THE MATTER, MY DEAR, DON’T YOU LIKE YOUR TOYS?
As a teenager I picked up on how Sarah gave up material things throughout her journey (bracelet, ring, everything she used to cherish in the junkyard scene). I started to see the film as a coming of age story in which Sarah becomes less selfish, less materialistic, and more maternal.

But most importantly as a teenager, I noticed what is referred to as the Bowie Bulge. I won’t elaborate too much on this since there are Tumblr and Pinterest pages devoted to the fandom of the bulge itself. 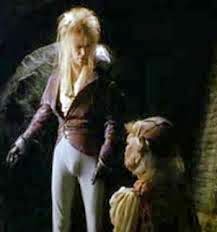 THE WAY FORWARD IS SOMETIMES THE WAY BACK
As a young adult Sarah’s bedroom became worthy of attention instead of just the boring part preceding the action: the Hoggle bookend, stuffies of the fieries, Sir Dydimus and Ludo, a wooden labyrinth game, a print resembling the cleaners, the ballerina music box playing “As the World Falls Down”, a goblin king sculpture on the dresser, the crazy stairs poster (Escher’s “Relativity”).

The books in Sarah’s room that I’m familiar with mirror her journey. Where the Wild Things Are, for example, is the story of a boy who, angry at his mother, goes into his room and imagines being transported to land of beasts until he decides to return (Toby’s striped pyjamas may be an ode to the monsters in Max’ world). There’s The Wizard of Oz, in which a girl enters a fantasy world, makes three friends who help her get to the location of a powerful being and then finding out she had the power to return home all along.

There are aspects of Labyrinth I definitely didn’t catch until adulthood - the age difference between Sarah and Jareth, for example. When the film was shot Connelly was 14 and Bowie was 37. It’s a disturbing sexual subtext.

SHE TREATS ME LIKE A WICKED STEPMOTHER IN A FAIRY STORY, NO MATTER WHAT I SAY
As a parent, the age difference between Sarah and Jareth, which I had never paid attention to, has become a disturbing sexual subtext difficult to overlook. When the film was shot Connelly was 14 and Bowie was 37. This makes me think of Freud. - in fact, one article called Labyrinth “the most blatantly Freudian film in the history of the world.” I don’t know that I agree with the purely Freudian analysis of Labyrinth, but it is difficult to ignore all of the phallic and fertility symbols: the many obelisks, a ball that turns into a snake, a peach infested by a worm, groping hands, dismembered heads, bubble balls, cannon balls, glass balls, rock balls. If we return to strange and wonderful things found in Sarah’s room, the most interesting is probably the open scrapbook featuring her birth mother, an actress, who is pictured in several photos with a man none other than David Bowie. So if the Labyrinth is Sarah’s fantasy, the face of the older man obsessed with her is that of...her step-father?

I CAN’T LIVE WITHIN YOU
Nowadays my interpretation of the film is as fluid as ever. I see the entire film as an allegory. Jareth lives within Sarah as her impulsive darker side that is dying out while Toby represents her maternal side that becomes more pronounced. To this day I’m unsure who Sarah is referring to when she says “You have no power over me.” Her mother? Her emotions? Jareth? Men? Manipulative people? The darkness within herself? Luckily, the film is as enjoyable to watch in a straightforward manner as it is to dissect it and I’m still able to appreciate it that way.

EVERY NOW AND AGAIN IN MY LIFE - FOR NO REASON AT ALL - I NEED YOU. ALL OF YOU.
Inspiration for this article came from reading about the documentary David Bowie Is premiering at the Mayfair this month so check that out if you’re a Bowie fan. By pure coincidence, Labyrinth was recently trending due to false rumours of a sequel. If the news of it being a hoax disappointed you, I strongly recommend the little known Return to Labyrinth manga four-part series. The story takes place 13 years after the timeline of the movie and centers around an adolescent Toby. It brings back the characters we know and love/fear and also introduces new interesting ones.

Posted by Capital Geek Girls at 20:32