GAMES FOR TWO
By Tracy Thillmann
Many people think that board games are for parties, or big groups, so often stay away from them when there are just two of you. Not so, in fact many games nowadays play well with two people, and some even have a single person option. So if you are a pair of roommates, a young duo, or a couple of empty nesters looking for something new and social to do together, well look no further than today’s modern board games.
Most games can play two people, but often they have a variant, or are ‘more optimal’ with 3-4 people. Rulebooks can sometimes be short novels so learning a new game, and then learning a variant as well is a bit daunting. So where do you begin, you ask? Look no further than right here; a compiled list of some of the games that work great for two players as well as when you have more company, and also how they work.
TICKET TO RIDE 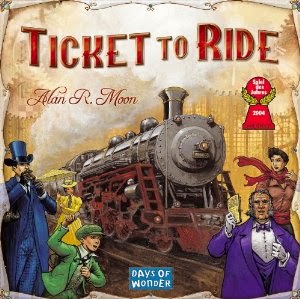 Who doesn’t love trains? Well okay, maybe not to the point of Sheldon-esque proportions but most everyone understands the concept of trains. And admit it; you love trains just a little. Ticket to Ride is a beautiful game with easy to pick up rules.
The goal: To lay out your train tokens, and complete destination tickets. By collecting cards of certain colours, you play the cards to complete routes that help you finish your tickets. The game ends when a person gets down to two trains, then there is one last round for everyone to complete tickets. You can always collect more destination tickets to earn more points at the end of the game, but beware, any tickets you don’t complete count against your score.
The great thing about this game is the different maps you can buy, some are base games, and some are expansion maps that need the trains/cards from the base set, but play on their own. They all play well with two and some can play up to 5 so great when you do have company.
CARCASSONNE
A tile based, worker placement game that has a nice, simple base set with many expansions to change up the strategy. You draw individual tiles and place them to build roads, towns, monasteries, and farms. 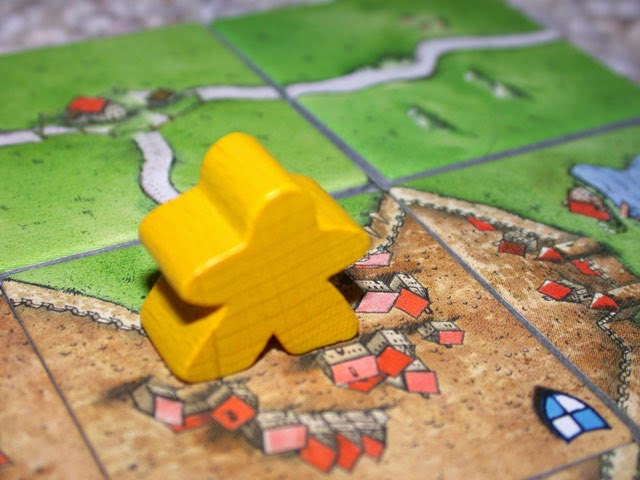 The Goal: You place tiles to fit the existing placed tiles on your turn, and then you can choose to place your Meeples (wooden workers) on that new tile to take control of one the four choices that may be on it. With exception of the farms, your Meeples return to you once the project is finished. You score points for the length of road, the size of the town, the monastery being surrounded by tiles. The farmers stay on the farms until the end of game scoring so the trick is to make sure you don’t place too many farmers down or you won’t have Meeples to place to score points throughout the game. The game ends when the last tile is placed, and final scoring begins.

This is a fantastic, gateway game that is often one of the ones that people first play when getting into modern board games. It plays quite well with two, and can play up to five people.
VIVA JAVA: THE DICE GAME 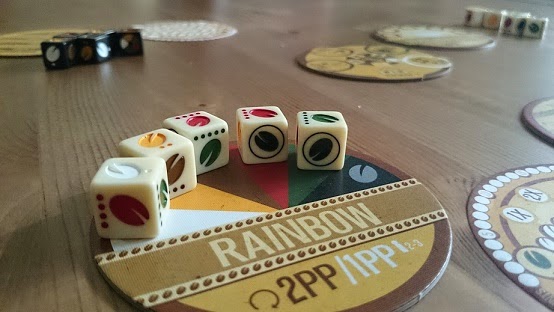 A dice game about coffee; Yes coffee! A simpler, more compact version of the original board game, you roll dice to make blends with the various coffee beans on the dice.
The Goal: You can strategize to pool your dice and make blends of different types of beans. Some allow for quicker points, some are an investment which gives you points over a few rounds. Your blends will degrade but with the right combination you can maximize greater points. The game ends when someone is the first to get to twenty-one points.
It is nice and compact, so travels well. It can even play one person but plays better with two or more. The dice game can play up to five players; if you are feeling like a more involved game, the board game can play up to eight people, but isn’t as good for just two because there is some collaborating that goes on, and thus works best with four or more.
RIVALS FOR CATAN
This game only plays two players but it is a fantastic game but has lots of playability. It is a territory 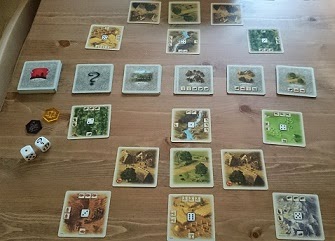 building game that uses cards to create your own villages; which have resources, trades, and people.

The Goal: Starting with one village, two roads leading horizontally out of the village, and starting with six resources spaced above and below, you gather points through the various trades, buildings, and people that you purchase with the resources gathered. More villages being built, and upgrading villages to towns also get you points. The game ends with the first person to reach a certain fixed amount of points, the base game is to seven victory points, with expansions increasing the difficulty and the total points to end the game.
This isn’t a game for more than two people, but it adds a different feel to the traditional Settlers game, and the base game has two expansions, plus there are two more than you can get to add on.
Other games that can play well with two players: Helios, Pillars of the Earth, Agricola, Blueprints, Gloom Smash Up.


With the massive amount of games out there nowadays, there is so many that can play just two people. In some cases there are variants to allow for the lower number of players. This may make some shy away from trying them, but once you have the basics down of certain styles of games you can pick up the basic rules, and add the modifications in quite easily. So when you are at home with just two of you, two words: board games!

Married, with four fur babies, Tracy has recently rediscovered her love of board games, and has acquired a wonderful collection. Being new to writing, it is just one more newly discovered world she is exploring. At the age of 37, Tracy now proudly shows off her geekiness, through her love of crafting and creating; well, at least until she defeats Ganon with the master sword, she finds the blue crystal staff, or the TARDIS shows up on her front doorstep.
Posted by Capital Geek Girls at 19:52