The weekend before last I attended Montreal Comiccon. While my main goal for the weekend was to stalk meet Stephen Amell, I was also on the lookout for something new and exciting to recharge the nerd batteries.

While my primary goal was completed  Saturday thanks to the Q&A, Photo Op and  Meet and Greet opportunities, by Sunday afternoon I was starting to think my secondary goal was not going to be accomplished. There was tons of beautiful art and the vendors were well stocked with interesting wares, but I wasn’t getting that ‘zing’.  I define the zing as that feeling  where your radar has been pinged and you are now hyper-aware of the presence of something awesome.  I was just about to turn to my con-buddy and tell him I was going to call it a day when I saw it:

This shirt literally stopped me in my tracks. I’ve been a Shakespeare nut since I was about 12 years old. I spend more time at the movie theatre watching National Theatre Live performances than I do actual films and I was gifted a lovely Complete Works of Shakespeare from my aunt and uncle  when I was in university.   The shirt was so genius I didn’t even notice the rest of the table until the gentleman behind the table asked “Have you heard of Kill Shakespeare?” 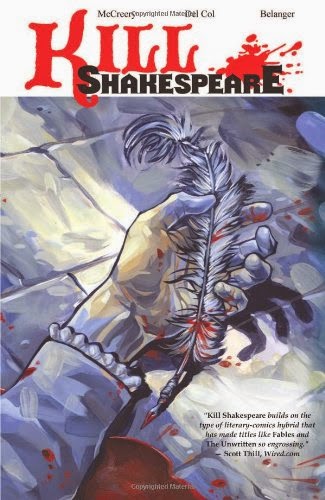 That gentleman was Connor McCreery co-creator of  the Kill Shakespeare comic series.  He walked me through the basics: Hamlet is transported to a mythical land which is either cursed or protected, depending on what side of the argument you side with, by a wizard named Will Shakespeare.  The lord of the land, Richard III wants Hamlet to find and kill the powerful wizard. However a rebellion, lead by Juliet Capulet, is calling Richard a tyrant and asking for Hamlet’s help to find Shakespeare and overthrow the king.  The T-shirts were a tie-in and even more clever once you understood the context.  I picked up the first volume of the graphic novel, A Sea of Troubles, and resolved to read it on the bus back to Ottawa.

You don’t have to be a Shakespeare fan to like this book. While there are winks, and references, the authors make sure that the uninitiated have enough information to not be lost. The story is epic in every sense of the word with twists and turns that keep the audiences guessing just as much as the characters. I honestly have no idea what will happen next and I love that.


With great art by , well rounded characters and an excellent story I’m looking forward to picking up the next instalment.  Of course by next instalment I mean everything that’s currently published. Once I pick it up I know I’m not going to want to put it down until it’s done.

Courtney Lockhart lives in the west end of Ottawa with her husband and step-cat.  She is polishing her skills to pursue one of her dream careers as either a costume drama character, Torchwood operative or executive assistant to a billionaire vigilante. You can follow her daily mission to DFTBA on Twitter @corastacy.
Posted by Capital Geek Girls at 21:46